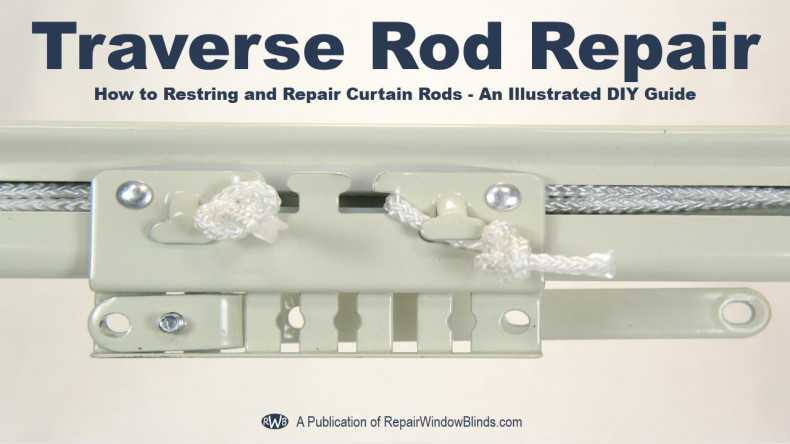 Once you restring your center draw curtain rod, if you look at it from the back side, it should look something like the first photo shown below. In the photo, the carrier on the left (the one with the knots) is what I call the primary or master carrier.

You will need to put the rod back up on the wall and re-hang the drapery or curtain on the rod before you proceed.

Pull on the draw cord to close the drape, the primary carrier will traverse until the drapery or curtain panel on that side is fully extended. If the rod was properly installed to match the width of the curtain, the carrier will be in the center of the rod.

Using a small screwdriver, pull the exposed cord out to form a loop as seen below.

Now place the loop over the anchor point on the carrier.

The anchor point for the rod shown is a plastic tab located just below the cord slot. On some other brands of traverse rod the anchor point(s) will be small tabs located on either side of the cord slot – you’ll know them when you see them. You only need to anchor the cord to one of those tabs. Which one you choose is up to you. I don’t think it matters.

Finally, you pull on the draw cord until the cord loop is snug to the anchor point and you’re done!

Now when you operate the pull cord, both sides should open and close in unison and they should come together neatly in the center every time.

As you can see, this whole process is pretty simple.

It is important to hold the pull cord so that the primary carrier doesn’t move away from center while you are anchoring the cord to the secondary carrier. Of course, if something does go haywire, you can always disconnect the anchor point and start over.